The Only Smart Chlorine

Along with smartphones and smart TVs, FROG® has smart chlorine.

FROG @ease® uses SmartChlor® Technology, which is a completely different type of chlorine.

Why is it smart?

It knows what level of sanitizer is needed and delivers it automatically.

It’s different because SmartChlor does what no other chlorine can.

SmartChlor is prefilled in a silver cartridge. It maintains a consistently low free chlorine level for the life of the cartridge (about four weeks).  SmartChlor keeps a chlorine reserve that automatically releases only when contaminants are present. This is unlike dichlor, which is used up when contaminants enter the hot tub so it is no longer effective and the water has to be shocked.

SmartChlor maintains a free chlorine level of 0.5 to 1.0 ppm.  That’s 75%* less than the industry standard of 2.0 to 4.0 ppm.  And it never waivers so you don’t have to worry about frustrating yo-yo chlorine levels. The free chlorine never changes, it is consistent.

FROG Minerals, which come in the blue cartridge, are EPA registered sanitizers that only need a low level of chlorine to finish the job – this is why FROG @ease reduces chlorine use up to 75%*.  Minerals also condition the water so its softer. It’s this unique 1-2 punch of SmartChlor Technology and minerals that creates Fresh Mineral Water∞ that’s Cleaner, Clearer, Softer and Easier® to take care of.

3. Easy on Surfaces with no odors 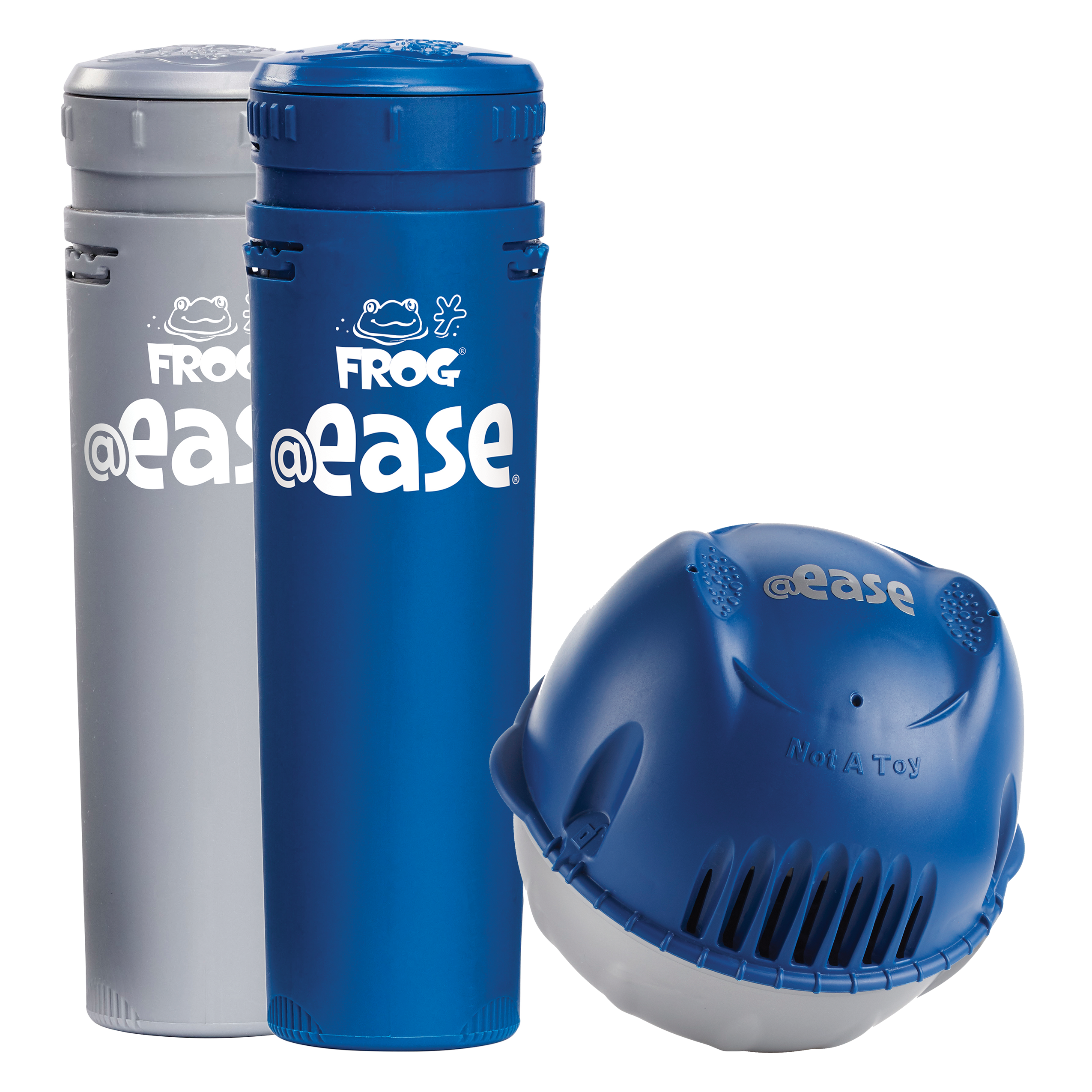 SmartChlor maintains a low free chlorine level, so the water feels much softer than it does in a standard chlorine hot tub. Reduced chlorine makes water easier on skin and hot tub surfaces.

When dichlor is used and hot tub water is not regularly shocked, the water builds up a strong chlorine odor. Contrary to common opinion, a strong chlorine smell does not mean you have too much chlorine but the opposite – look for future articles where we’ll explain why! With SmartChlor’s self-shocking properties, odors are non-existent.

Cyanuric Acid, CYA, is a chemical added to chlorine to prevent the sun from burning up the chlorine in a pool or hot tub – it acts as a sunscreen to protect the chlorine. For outdoor pools, it’s helpful. For hot tubs, which are usually covered unless in use, and rarely in direct sunlight, CYA is unnecessary. CYA is responsible for cloudy, irritating, smelly water that also shortens water life and causes the need to drain and refill the hot tub more often. In fact, the CDC recommends not using cyanuric acid or chlorine products with cyanuric acid in hot tubs/spas1. You never have to worry about that with FROG @ease because it has no cyanuric acid.

5. Shock Only Once a Month

Instead of shocking multiple times a month or after each hot tub use, with SmartChlor you need to shock only once a month. This is also due to the time-released nature of SmartChlor’s technology.  It’s basically self-shocking each time it releases more free chlorine – that means you don’t have to use more shock. 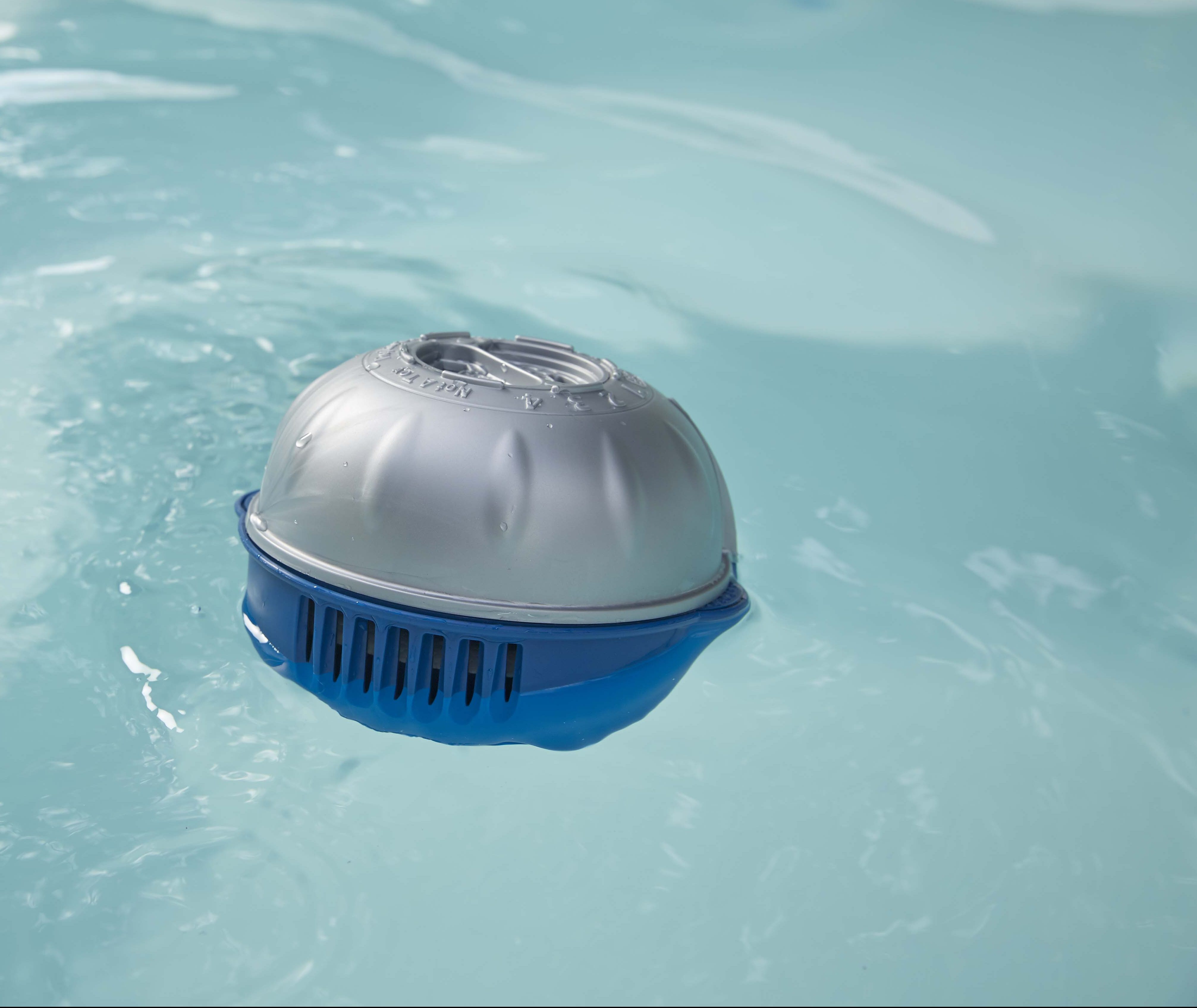 FROG @ease Floating System flips over when action is needed.

Due to SmartChlor’s uniqueness, it has its own test strip with one color to match. That makes testing your hot tub water much easier than matching several different colors.  The Test Strip has a “SmartChlor Out Indicator.” When the test strip shows it’s darker than the SmartChlor Out Indicator color, all is working well. When it’s lighter, the silver SmartChlor cartridge is nearly empty. Plus, the FROG @ease Floating System gives you another visual out indicator – it flips over!

2.* Compared to the minimum ANSI recommended chlorine level of 2.0 ppm for a hot tub.

Find a FROG @ease dealer near you today!

FROG Products has launched a free app to further improve your FROG Water Care experience! Now you can test your water, troubleshoot issues and find your local dealer all in the same spot.

FROG products can be purchased from local dealers in your area. Over the past 20 years, we have built a strong nation-wide network of dealers that carry our products and can service your needs. For this reason we do not sell our products on-line or directly to the pool or spa owner.

Find Now
We use cookies on our website to give you the most relevant experience by remembering your preferences and repeat visits. By clicking “Accept All”, you consent to the use of ALL the cookies. However, you may visit "Cookie Settings" to provide a controlled consent.
Cookie SettingsAccept All
Manage consent

This website uses cookies to improve your experience while you navigate through the website. Out of these, the cookies that are categorized as necessary are stored on your browser as they are essential for the working of basic functionalities of the website. We also use third-party cookies that help us analyze and understand how you use this website. These cookies will be stored in your browser only with your consent. You also have the option to opt-out of these cookies. But opting out of some of these cookies may affect your browsing experience.
Necessary Always Enabled
Necessary cookies are absolutely essential for the website to function properly. This category only includes cookies that ensures basic functionalities and security features of the website. These cookies do not store any personal information.
Non-necessary
Any cookies that may not be particularly necessary for the website to function and is used specifically to collect user personal data via analytics, ads, other embedded contents are termed as non-necessary cookies. It is mandatory to procure user consent prior to running these cookies on your website.
SAVE & ACCEPT