The Center for Disease Control recommends not using cyanuric acid or products containing CYA in hot tubs or spas.

According to an article on Healthy Water from the CDC, they make a bold statement that “The CDC recommends not using cyanuric acid or chlorine products with cyanuric acid in hot tubs/spas.”  The reason is the build up of CYA causes consumers to potentially soak in water that is not properly sanitized because too much CYA in water inhibits the effectiveness of the chlorine.

The Pennsylvania Department of Health in December 2016 published this statement “At even moderate levels of cyanuric acid, the amount of time it takes chlorine to kill pseudomonas aeruginosa (the bacteria that causes “hot tub itch) can be as much as a hundred times as long as in a hot tub or spa without cyanuric acid.”

These studies are recognizing what has been known in the swimming pool world for some time – that too much CYA is a bad thing. The reason is it effects the kill rate of chlorine. The kill time (CT value) for pseudomonas aeruginosa (the organism associated with hot tub rash) with no CYA is about 20 seconds. It is 1 minute and 30 seconds with 50 ppm CYA, and nearly 2 minutes with 100 ppm CYA. As CYA increases the effectiveness of the chlorine decreases.

To achieve the same kill time would require a much greater chlorine level in the water. But using dichlor you keep increasing the CYA level so it’s harder and harder to maintain the right chlorine level. 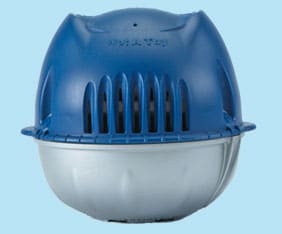 We use cookies on our website to give you the most relevant experience by remembering your preferences and repeat visits. By clicking “Accept All”, you consent to the use of ALL the cookies. However, you may visit "Cookie Settings" to provide a controlled consent.
Cookie SettingsAccept All
Manage consent

This website uses cookies to improve your experience while you navigate through the website. Out of these, the cookies that are categorized as necessary are stored on your browser as they are essential for the working of basic functionalities of the website. We also use third-party cookies that help us analyze and understand how you use this website. These cookies will be stored in your browser only with your consent. You also have the option to opt-out of these cookies. But opting out of some of these cookies may affect your browsing experience.
Necessary Always Enabled
Necessary cookies are absolutely essential for the website to function properly. This category only includes cookies that ensures basic functionalities and security features of the website. These cookies do not store any personal information.
Non-necessary
Any cookies that may not be particularly necessary for the website to function and is used specifically to collect user personal data via analytics, ads, other embedded contents are termed as non-necessary cookies. It is mandatory to procure user consent prior to running these cookies on your website.
SAVE & ACCEPT
Frog Products
×
Menu